This is a Read aloud Site: How to Use
Custom Search in this Site:-
Skip to content

The Gita has eighteen (18) chapters and a total of only 700 verses. Anyone can be helped by daily practice of only a few ot it's teachings. 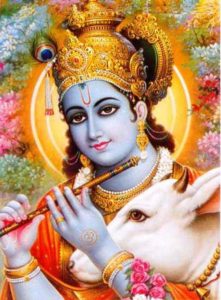 Jai: Grandma, I have a hard time understanding the teachings of the Bhagavad-Gita. Would you help me?

Grandma: Of course, Jai, I will be glad to. You should know that this holy book teaches us how to live happily in the world. It is an ancient holy book of Hindu Dharma (also known as Sanatana Dharma or Hinduism), but it can be understood and followed by people of any faith.

The Bhagavad-Gita has eighteen (18) chapters and a total of only 700 verses. Anyone can be helped by daily practice of only a few of its teachings.

The word ‘Bhagavad’ means God or The Supreme Lord, Bhagavan in Sanskrit. ‘Gita’ means song. Thus The Bhagavad-Gita means the Song of God or the Sacred Song, because it was sung by Bhagavan Shri Krishna himself

Here is the introduction to the Gita:

After the death of king Pandu, his eldest son, Yudhisthira, became the lawful King. Duryodhana was very jealous. He also wanted the kingdom. The kingdom was divided into two halves between the Pandavas and the Kauravas. Duryodhana was not satisfied with his share. He wanted the entire kingdom for himself. He tried several evil plots to kill the Pandavas and take away their kingdom. Somehow he took over the entire kingdom of the Pandavas and refused to give it back without a war. All peace talks by Lord Krishna and others failed, so the big war of Mahabharata could not be avoided.

The Pandavas didn’t want to fight, but they had only two choices: fight for their right because it was their duty or run away from war and accept defeat for the sake of peace and nonviolence. Arjuna, one of the five Pandava brothers, faced this choice in the battlefield.

He had to choose between fighting the war and killing his most revered guru, who was on the other side; his very dear friends, close relatives, and many innocent warriors; or running away from the battlefield to be peaceful and nonviolent.

The entire eighteen chapters of the Gita are the talk between confused Arjuna and his best friend, mentor and cousin, Lord Krishna --- an incarnation of God --- on the battlefield of Kurukshetra near New Delhi, India, about 5,100 years ago. This conversation was reported to the blind king, Dhritarashtra, by his charioteer, Sanjay. It is recorded in the great epic, Mahabharata.

All lives, human or nonhuman, are sacred, and nonviolence or Ahimsa is one of the most basic principles of Hinduism. So when Lord Krishna advises Arjuna to get up and fight, this may confuse you about the principle of Ahimsa if you don’t keep in mind the background of the war of Mahabharata.

This spiritual talk between the Supreme Lord, Krishna, and His devotee-friend, Arjuna, occurs not in a temple, a lonely forest, or on a mountain top, but on a battlefield on the eve of a war.

Jai: This is an interesting story, Grandma. Can you tell me more?

Grandma: If you come to where I sit every evening, Jai, I will tell you the whole story, one chapter each day. Just make sure your homework is done and you have time to listen. If you agree, let’s start tomorrow.

Jai: Thank you, Grandma. I’ll be there to hear more.